Kongōrikishi (金剛力士) or Niō (仁王) are two wrath-filled and muscular guardians of the Buddha, standing today at the entrance of many Buddhist temples all across Asia including China, Japan and Korea in the form of frightening wrestler-like statues. They are manifestations of the BodhisattvaVajrapāṇi protector deity and the oldest and most powerful of the Mahayana pantheon. According to Japanese tradition, they travelled with the historical Buddha to protect him and there are references to this in the Theravada Scriptures as well as the Ambatta Sutta. Within the generally pacifist tradition of Buddhism, stories of Niō guardians like Kongōrikishi justified the use of physical force to protect cherished values and beliefs against evil. Nio-Vajrapani is also seen as a manifestation of Mahasthamaprapta or the Bodhisattva of Power that flanks Amida in the Pure Land Tradition and asVajrasattva, the Dharmapala of the Tibetan tradition. 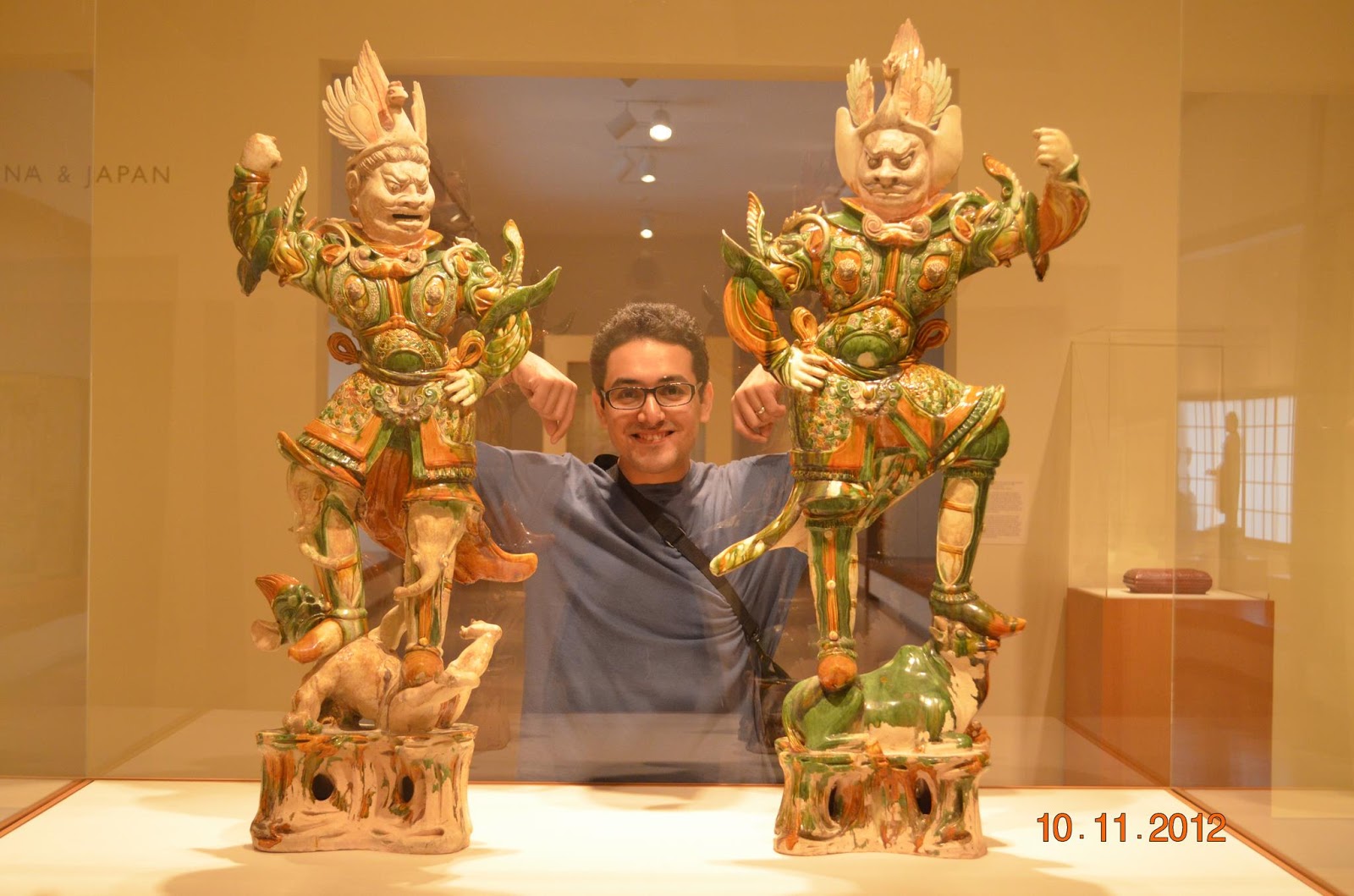 Kongōrikishi are usually a pair of figures that stand under a separate temple entrance gate usually called Niōmon (仁王門) in Japan, Heng Ha Er Jiang (哼哈二将) in China and Geumgangmun (金剛門) in Korea. The right statue is called Misshaku Kongō (密迹金剛) and has his mouth open, representing the vocalization of the first grapheme of Sanskrit Devanāgarī (अ) which is pronounced "a". The left statue is called Naraen Kongō (那羅延金剛) and has his mouth closed, representing the vocalization of the last grapheme of Devanāgarī (ह [ɦ]) which is pronounced ɦūṃ (हूँ). These two characters together symbolize the birth and death of all things. (Men are supposedly born speaking the "a" sound with mouths open and die speaking an "ɦūṃ" and mouths closed.) Similar to Alpha and Omega in Christianity, they signify "everything" or "all creation". The contraction of both is Aum (ॐ), which is Sanskrit for The Absolute.


Misshaku Kongō (密迹金剛), also called Agyō (阿形?, "a"-form, general term open-mouthed statues in aum pair), is a symbol of overt violence: he wields a vajra mallet "vajra-pāṇi" (a diamond club, thunderbolt stick, or sun symbol) and bares his teeth. His mouth is depicted as being in the shape necessary to form the "ah" sound, leading to his alternate name, "Agyō". Misshaku Kongō (密迹金剛) is Miljeok geumgang in Korean, Mìjī jīngāng in Mandarin Chinese, and Mật tích kim cương in Vietnamese. It is equivalent to Guhyapāda vajra in Sanskrit.

Kongōrikishi are an interesting case of the possible transmission of the image of the Greek hero Heracles to East Asia along the Silk Road. Heracles was used in Greco-Buddhist art to represent Vajrapani, the protector of the Buddha (See also Image), and his representation was then used in China and Japan to depict the protector gods of Buddhist temples. This transmission is part of the wider Greco-Buddhist syncretic phenomenon, where Buddhism interacted with theHellenistic culture of Central Asia from the 4th century BC to the 4th century AD. 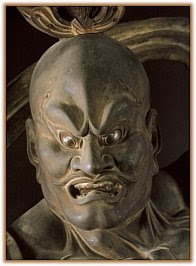 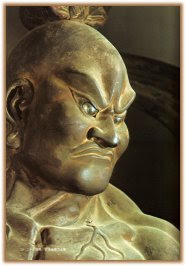 INTRODUCTION. Hindu Gods incorporated into Buddhism as protectors against evil spirits. If you look at their mouths, you will notice that one has its mouth open and the other has its mouth closed, said to represent life and death, the beginning and the end. The most famous Niō in Japan can be found at the entrance gate of Tōdaiji Temple 東大寺 in Nara. These 26-feet-tall statues were made in 1203 AD, reportedly under the direction of the famous sculptors Unkei and Kaikei. The Niō were introduced to Japan in the 7th or 8th century. The oldest extant statues of the two in Japan (dated to 711) are located at Hōryūji Temple 法隆寺 in Nara, and the 8th-century dry-lacquer sculptures at Tōdaiji Temple 東大寺 in Nara.

The Niō (Jp. = Benevolent Kings) are a pair of protectors who commonly stand guard outside the temple gate at Japanese Buddhist temples, one on either side of the entrance. In Japan, the gate itself is often called the Niō-mon 仁王門 (literally Niō Gate). At Shintō shrines, however, the Niō guardians are replaced with a pair of koma-inu (shishi lion-dogs) or with two foxes. These mythical and magical shrine guardians are commonly (but not always) depicted with similar iconography -- one mouth open, one closed.

Howdy! This is my first comment here so I just wanted to give a
quick shout out and say I genuinely enjoy reading your articles.
Can you suggest any other blogs/websites/forums that go over the same
subjects? Appreciate it!

Here is my webpage - air Jordan